Yeah, yeah, I went out to a theater (alone) and saw the newest Twilight movie. I purposefully waited until it had been out a couple weekends, and I waited til […]

Yeah, yeah, I went out to a theater (alone) and saw the newest Twilight movie. I purposefully waited until it had been out a couple weekends, and I waited til the last show on a weeknight. This resulted in the best case scenario; me watching the movie alone. No young girls drooling over the male stars. No smartass teenage boys making annoying jokes. No old people wondering aloud what they’d just walked into. Just me and some horribly written glittery vampire angst.

First, a brief recap of my history with this franchise. I watched the original Twilight on Netflix long after it came out on DVD just to see what the lunacy was all about, and actually thought it was decent. Then I saw New Moon in theaters, and it was absolutely dreadful. For some reason, this didn’t stop me from seeing Eclipse in theaters, but the third installment was actually decent throughout, and almost qualifies as an actual “good movie”. Though I am glad I also waited to see that one a couple weeks after it came out. I almost went to see it at the opening night midnight show with two lady friends. For my own sanity, I’m glad that didn’t work out.

Even though the trailers for Breaking Dawn have been awful, and made it look like nothing more than a 2-hour episode of Vampire Teen Mom, I felt compelled to stay informed. Why the F not? I’ve seen 3 of these movies, may as well see the last two (or the last one that’s split in two). There have certainly been worse movies in 2011, and though I really don’t wanna do an in-depth review for this movie, I do feel compelled to get a few thoughts out there. Much sarcasm and nitpicking lay ahead, but I will also give credit where credit is due.

–The first 90 minutes of the movie, except scenes in which Ashley Greene appears (you’re welcome.). Cuz Ashley Greene is gorgeous, especially with those vampire eye contacts. Other than her, the first two-thirds of the movie are basically unbearable in almost every respect, from the wedding/pregnancy melodrama to the inexplicable and seemingly random infighting between the shirtless werewolf Indians. I couldn’t have cared less. I’ve seen better drama on soap operas. Actually that’s not true. I’ve never seen an entire soap opera episode, but I can guarantee this kind of crap is better executed on mid-day television.

If I have to put up with this, you better put Ashley Greene in the background posing or staring at the camera.
Something to distract me!

-The continued and utter lack of romantic chemistry between Robert Pattinson and Kristen Stewart. I don’t give a solitary rhino turd if these two are or aren’t actually dating in real life, but if they are, it sure as fuck doesn’t translate to the screen, does it? When I watch these two interact onscreen, not for a second am I convinced I’m looking at two people in love. It starts with the G-rated kissing. It’s always these cheesy little pecks. No open mouth kissing, no sign that either of them have tongues. You’re telling me a hundred year old vampire and a teenage girl wouldn’t full-on make out? Gimme a break. Not that I want to see an NC-17 sex scene between the two, but come on. A little realism and honesty would be nice. They look like 12-year olds when they’re kissing. I’m embarrassed for them. Also, the “love scene” in their little Brazilian beachside villa? Be more lame and unconvincing, please. These two are the most boring babymakers in the history of the old in-out, in-out. I had to LOL in the theater when they show Bella in the morning, looking around at her broken bed, as if they’d just had a wild night of passionate lovemaking. No, he’s just too strong, and probably tore the place apart in frustration over how f’ing prude you are in bed. Bella didn’t do shit except lay there like a corpse. Is this what the Justin Bieber worshippers watching these movies over and over again envision when they fantasize about Robert Pattinson every night? Laying under him like a slab of meat while he pecks them on the lips? Whatever does it for ya, I guess.

And really? I have to watch these two play CHESS?! This bitch couldn’t entertain me playing a game if she were playing Wii tennis while overdosing on cocaine. No, let’s watch the most uninteresting protagonist in cinematic history playing a game that requires her to sit there and look bored. Real cinematic! Maybe we can watch her play solitaire in Part 2.

Yes, that was far too much analysis on the lovemaking abilities of Edward & Bella. But they had to be called out. Seriously though, if one female fan of this series can tell me precisely what they find fascinating about this romance, I would be eternally grateful. I simply don’t understand. The writing is horrific and there’s no chemistry whatsoever between the two actors. What is it here that’s doin it for ya, ladies? Help a brotha out.

–Taylor Lautner is just fucking awful, isn’t he? I mean, if you put a cardboard cutout of Jacob in every scene the real Lautner was performing in, the cardboard cutout may have emoted better. I really don’t have anything else to say about him. I’ll just be thrilled when these movies are over and Hollywood stops giving him lead roles in non-Twilight movies. He’s not a movie star. He’s a boy band member with an asexual name who can’t sing, dance or act. 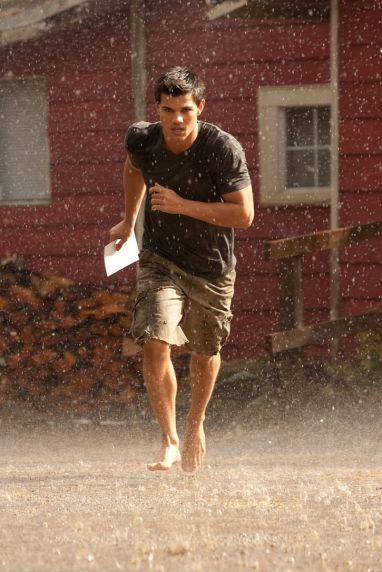 I call this the Silly Jacob Rage Run.
“Send me a wedding invitation?! I’ll show you! By running off aimlessly into the wilderness shirtless!”

–The scene with the telepathic voiceover over the CGI werewolves. Sorry, it just didn’t work. At all. So these people can speak to each other telepathically while in werewolf form, but when they’re walking around as humans, they have to speak out loud at all times? That doesn’t make any fuckin sense, brah. The effects were fine, but can you imagine the crew filming a bunch of logs all day for that scene? That must’ve been a laugh riot.

-Speaking of werewolf nitpicks…when they turn into wolves, their clothes come tearing off, but when they reemerge from the forest as humans, they have their clothes back, good as new. I need this explained to me. This is just as crazy as Optimus Prime‘s trailer disappearing into thin air in the Transformers cartoons.

-Edward & Bella fly out of the American northwest at night for their honeymoon, and a few cuts later, they arrive in BRAZIL (!!!) and it’s still nighttime. That has to be at least a 10-hour flight, assuming they took only one flight with no connections. Apparently Edward can make planes teleport around Nightcrawler-style like the vampires move around in the forest. I know that’s a nitpick, but it amused the shit out of me as I watched it unfold.

–The baby. Really, after all this hype and mumbo jumbo about cursed human-vampire devil babies, it turns out to be a normal looking kid? After the pain we see Bella go through for a solid hour, and the way various other characters fear and despise it before it’s even born, I expected a six-legged scaly thing with horns to come flying out of her stomach Alien-style. Nope, just a regular baby. Other than the fact that it grew at a billion times the normal rate, why was it draining her life away? Big letdown.

-There’s a cut scene midway through the end credits (I don’t know why I was still in the theater at this point, either), showing Michael Sheen and the Vulturi (the high council of vampires, or whatever the hell it is they do) having a sinister meeting discussing the recent events. That’s all well and good, but can someone explain why they randomly kill the pretty girl who brings them the news on a plate? Don’t kill the messenger, bro! What a bunch of a-holes. Maybe this is explained in the book, but I’m not reading the book to find out. Somebody just tell me. What did she do wrong other than get the mail for these douchelords?

-The final 27 minutes of the movie, for the most part. The stakes were raised, there was some legitimate tension, the action was well done, and stuff finally started making sense! Kinda!

-Any moment Ashley Greene was on screen. (This needs to be stressed.)

Finally, I hope that one of Bella’s new vampire powers, along with her red eyes, is that she acquired a fucking personality. Or ANY trait that would make her character the least bit interesting. We can hope.

And that’s all I got, really. I’m not gonna recommend the movie, because it isn’t that good. 25 or so entertaining minutes do not give me the other 80-90 minutes back to spend elsewhere. Either way, you’ve already seen this movie if you were going to, and even if I gave it a raving positive review, it wouldn’t convince a single Twilight hater to give it a chance. It’s rightfully getting mostly negative reviews, and that’s all critics and smart moviegoers can do…point out why it’s not good and why the rest of you are insane. We can’t stop women the world over from ignoring logic, because for some reason they believe Robert Pattinson is the most attractive male in human history. For me, I’m just happy we’re only a few weeks away from movies like Girl with the Dragon Tattoo, War Horse, Mission Impossible, New Year’s Eve, The Sitter and whole host of prestige movies that probably won’t open anywhere near me (SIGH). But above that, we’re just a few weeks away from the start of 2012, and all the greatness it will bring.

This has nothing to do with Twilight, but I need to share a new song that I love, M83‘s “Midnight City”, off their new album Hurry Up, We’re Dreaming. I love the mood this track puts me in, and credit to HBO’s How to Make it in America for introducing me to it by putting it over the end of one of their episodes a few weeks ago. The city is my church.

I write the things written on this blog. I do it anonymously because reasons. I promise I'm a decent person.